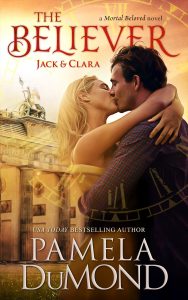 THE BELIEVER: Jack & Clara can be read as a STAND ALONE in the Mortal Beloved Time Travel Series by USA Today Bestselling author Pamela DuMond.

I’m Jack Spencer, a Messenger — a time traveler who delivers critical messages into the past. Traveling to Berlin during the Cold War will be dangerous – all the better to distract me from the fact that Clara Beaumont, the girl I have loved forever, is getting married today. Sadly, not to me.

But when I land in 1961 Berlin, I discover that Clara has accidentally time traveled here as well. And unlike me — she doesn’t ave a clue as to what she’s doing. Can I save the girl I love? Or will I lose her forever…

Christmas lights twinkled on this upscale part of Michigan Avenue in Chicago, a dusting of snow falling as holiday shoppers darted in and out of stores clutching bags filled with gifts. For anyone else this could have been an urban fairy tale, but for me it was a nightmare. The girl I had been in love with since I was twelve-years-old was getting married today and she wasn’t marrying me.

I stood on the sidewalk across the street from the historical 4th Presbyterian Church tucked between two pricy department stores decked out for the holidays. I gazed across the stop and go traffic; the red, yellow, and green lights of the traffic signals, the honking, and screeching of braking cars. I watched as pricy rides queued by the church’s entrance. Valets raced to open doors, take keys, and hand out parking stubs. Guests dressed in formal attire, cautiously made their way up the salt-strewn stairs and headed inside.

I’d been waiting for well over an hour, leaning back against a stone storefront, pretending to read from my phone so I wouldn’t look like a complete stalker, tolerating the damp coldness that drilled into my bones. I’d come here to catch a glimpse of Clara Marie Beaumont before I lost her forever.

It wasn’t my habit to stalk Clara, at least not in person. The last time I actually saw her was two years ago on the Southside. I’d checked her Instagram feed every week or so, knew she was getting her PhD in Art History at All Saints University, and recognized the local coffee shop that she tagged. Curiosity got the better of me, and one afternoon I took the “L” train down there. I bought a coffee, parked at a corner table, opened my laptop, and alternated between hoping she’d come in and hoping she wouldn’t. Clara never showed but the thought that I could see her here stuck in my head like an earworm. I returned to the coffee shop every day but it was only on the fourth visit that I finally saw her.

She pushed into the shop with two of her friends on a brisk Halloween afternoon. They were laughing and wearing super hero costumes: Wonder Woman, Supergirl, and Clara decked out as Storm. Strangely, it made sense that the girl who was capable of hurtling through time, delivering messages that could change one life or save many, would dress up as a kick-ass character that manipulated the weather.

Her friends claimed a table a few down from mine. I recognized Supergirl: Elise still had long shiny black hair. She was opinionated, bubbly, and had been friends with Clara since she was shipped off to boarding school in the 4th grade. She eyed me curiously for a second, but I ignored her, concentrating on the laptop opened in front of me. When Clara walked over carrying a cardboard tray filled with drinks and sandwiches, I couldn’t help but glance up.

Her blue eyes had the beginnings of crinkle wrinkles etched around them, tendrils of blonde hair poked out from under the wig, and she’d filled out a bit. Super heroines of any magnitude could not share the same page with my Clara. Don’t stare, I reminded myself. Good luck with that one.

I blinked, hunched, and dragged my focus back to the screen. I hid behind my shitty posture, my weathered laptop, and kept my eyes to myself, but hell yeah, I listened. They chatted about which party they were going to and who was going to be there.

“It’s my turn,” Elise said. “You met someone at the last party.”

A pang of jealousy stabbed holes in my heart: lucky the man who got to spend time with my Clara.

“What was wrong with this one?” Wonder Woman asked.

Clara frowned. “It’s not that there was anything wrong, it’s just that—”

One of the women’s phone chirped.  I glanced up and caught the irritation on Clara’s face when she picked up. “Yes, Mom. How’s it going? Good. No, we don’t need a chaperone. Elise’s brothers will be there. Yes, all of them. No, we won’t be out all that late. I’m twenty-four, Mom, remember? Must. Go.”

It struck me as I hid under my ball cap, behind my computer, that Clara’s life was a tsunami of over-protection, watchfulness, and caution. She was living a code red, fear-based existence. As much as I liked to pretend it was no longer my problem, the reality was it was also my fault. So I made a decision that day at the coffee shop: I wouldn’t ruin her life again.

I wouldn’t intervene, sharing stories of Messengers who slipped through time’s fabric traveling dozens or hundreds of years into the past. I wouldn’t interfere, whispering tales into her ear about those travelers who delivered messages that changed people’s lives, the way I did when we were kids, and huddled over a bonfire in the Wisconsin woods.

I closed my computer, tucked it into my backpack, and walked out the door, the bells jangling as it closed behind me. Clara had enough people trying to manipulate her. I didn’t want to be another one.

And I kept that promise until I spotted her Instagram post six weeks ago that she was getting married, and hell exploded in my head, shooting my resolve to pieces.

A newer model limo pulled up to the church. The paparazzi drew closer to the vehicle, and I wondered if Clara was in the back seat. What would it hurt if I saw her up close just one last time? Near enough to see the flush in her cheeks, the fullness of her lower lip, take in her curves and burn their memory into my brain for an eternity. Then I would stay away. Then I would be done.

I pushed off the cold, stone building and walked to the corner. As soon as the light turned green, I jogged across the avenue toward the limo.

THE BELIEVER is available in print and as an ebook. The Believer © 2018 Pamela DuMond. All rights reserved.

"...heartbreak, love, angst...I could not put this book down."  The Prince's Playbook #1
https://pameladumond.com/testimonials/the-crown-affair/

"...I was captivated." "...heart stopping, adrenaline-pumping adventures...  "Gritty and gorgeous."  The Messenger: Book One

"...I was captivated." "...heart stopping, adrenaline-pumping adventures...  "Gritty and gorgeous."  The Messenger: Book One
https://pameladumond.com/testimonials/10219/

"The perfect balance of funny (like laugh out loud funny), witty, and sexy (sosohot)!"  The Client

"The perfect balance of funny (like laugh out loud funny), witty, and sexy (sosohot)!"  The Client
https://pameladumond.com/testimonials/witty-and-sexy/

"I had a ball reading this fast-paced, joyous and frothy murder confection!"  Cupcakes, Diaries, and Rotten Inquiries

"I had a ball reading this fast-paced, joyous and frothy murder confection!"  Cupcakes, Diaries, and Rotten Inquiries
https://pameladumond.com/testimonials/front-page-testimonials-widget/

“Tycoon is breath-taking, beautiful, and brilliant. A must-read…”

Emma Chase and her big publishers took my PG-13 ro

Daily walk in my hood. Venice always surprises me.

Farm in the city. Best of both and a little slice

PART-TIME PRINCESS 2 princes are in love with Luc

Daily walk in the hood. A little slice of Zen. #qu

Lordy, this Venice cottage looks like it’s out o


Error: API requests are being delayed for this account. New posts will not be retrieved.